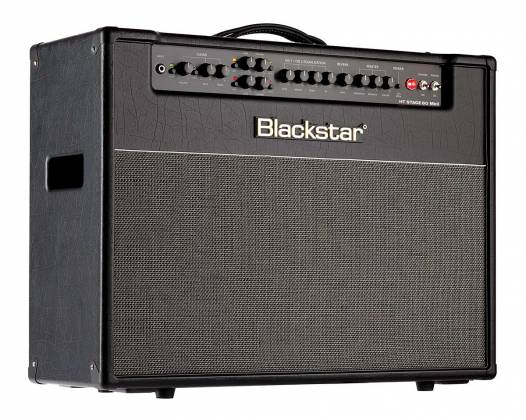 
Blackstar STAGE602MKII Details
Full tonal depth at any volume and retains the distinctive sound of power valves working hard.
The Blackstar STAGE602MKII (Also known as HT Stage 60 212 MkII) guitar amp's selected duet of EL34s deliver 60W of glorious valve power through two high quality Celestion speakers, making for a combo that will deliver every night, even in the most testing live environment. The 'boutique' style clean channel is extremely versatile with two modes - 'British Class-A' and 'dynamic US'. Each of the two ISF equipped overdrive channels allows a further two modes. The Power Reduction feature allows further flexibility, by allowing the guitarist to attenuate to 10 percent of the 60 watts of power also making the HT Stage 60 MkII perfect for the home and studio use.
STAGE602MKII Main Features:
Series Information:
The stunning next generation of HT Venue valve amplifiers.
After more than 3 years of intensive R&D and market research, Blackstar are proud to release the stunning next generation of HT Venue valve amplifiers. HT Venue MkII takes this award-winning line and elevates it to a new level of sonic performance, whilst adding every major enhancement that guitarists have requested; resulting in a massively flexible feature set that is still intuitive and musician-friendly.
The mission was "simple": improve on the sonic references of the best vintage and new valve amps on the planet, in the way Blackstar is renowned for and combine the sounds into a cohesive, creative product.
MORE REFINED CLEANS
The ground-breaking clean channel has two voices and offers the ultimate in clean tone quality and flexibility. One voice is based on a classic American circuit and the second channel is based on a classic British tone. The Voice switch reconfigures the preamp voicing, EQ and valve gain structure, as well as the power amplifier damping. This produces a clean, bright and tight but solid bass response for the American tone and a highly responsive 'chime' with a looser bottom for the British tone that can be pushed into a midrange overdrive when driven hard. All Clean channels now include Bass, Treble and a Voice switch.
MORE RESPONSIVE OVERDRIVES
Boasting two richer, fuller and responsive voices on the Overdrive channels, the high gain voices are tight and focused, drawing on the original award-winning HT Venue Series. These two voices provide a broad palette of overdriven tones. When switching between channels, the amplifier will recall the specific Voice setting last used on that channel. The Overdrive voices are characterised by a tone which is high in gain, but avoids any of the detached top-end 'fizz' often found in other designs. This is a result of unique preamplifier and power amplifier shaping techniques, which also benefit the player in the way the overdrives clean up beautifully as the guitar volume is reduced. Even at the most extreme settings, the Overdrive voices remain natural sounding.
MORE FLEXIBILITY
All modes are footswitchable, resulting in the widest possible selection of stage accessible valve tones and footswitchable boost on all channels. The supplied 2-way footswitch enables the selection of the Clean and Overdrive channels, and the two voices on each Channel.
The optional 5-way footcontroller enables instant access to all channels and voices, plus the global boost function and Reverb switching for maximum control.
MORE CONTROL
A switchable power reduction circuit has been included with the HT Venue MkII models giving reliable, transparent attenuation down to 10 percent of the amp's rated power. This means that the full tonal depth of the EL34 power stage can be enjoyed at any volume, retaining the distinctive sound of power valves working hard, making the HT Venue MkII perfect for any live or recording situation.
MORE PRO RECORDING OPTIONS
The simplest way to get valve tone into your recordings. The flexibility of adding a USB connector allows for sending up to 4 channels of the guitar signal, dry, preamp out and stereo emulated out into a computer for recording purposes. Two further outputs on the rear, a stereo jack socket and balanced XLR, also allow the speaker emulated signals to be connected to external devices for practicing, recording or live use.
MORE PRO FEATURES
The patented ISF (Infinite Shape Feature) control is unique to Blackstar Amplification and represents a major step forward in tone shaping flexibility. The ISF control shifts the response of the three control tone stack between, a US type response at one end, and at the other, a UK type response. Importantly, in between the two extremes lie an infinite number of alternative tone choices that would be otherwise unavailable.
The amplifier features naturally sounding digital reverb that can be adjusted via the Reverb control on the front panel or turned on and off via the optional 5-way footcontroller. A switch on the rear panel selects between 'Dark' and 'Light'. The Dark setting is based on a room reverb and the Light setting is based on a plate reverb.
MORE COMPACT AND PORTABLE
All the HT Venue MkII products have been reengineered to make them more practical and portable.
General Features:
Speaker Emulated output with 1x12/4x12 voicing and Effects loop with effects level switch.

Similar products to the Blackstar STAGE602MKII
SAVE
$340.01 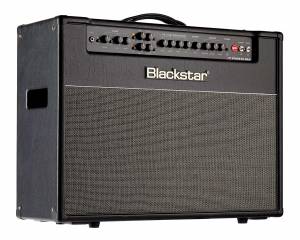