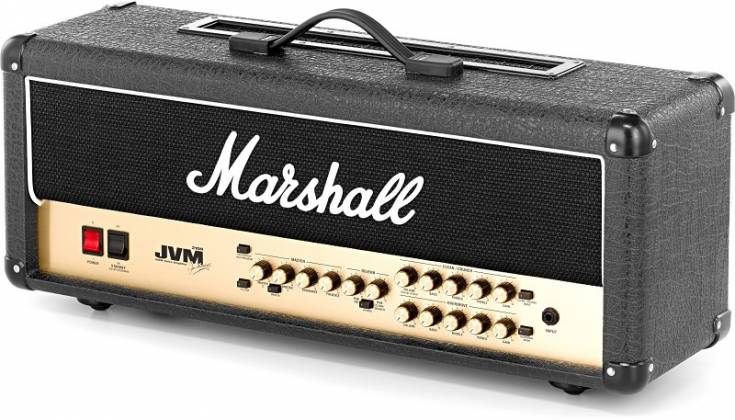 Marshall JVM210H Details
The Marshall JVM210H all-tube 100-watt amplifier head brings you the full range of Marshall tone - from pristine to dirty!
The 2-channel JVM210H gives you six modes covering two independent channels with three gain stages, each with its own footswitchable memory. It's a great feature for ultra-flexible onstage switching (via the included dedicated, programmable footswitch unit). Two effects loops, independent reverb for each channel, a speaker-emulated XLR line-out, and two footswitchable master volumes are also great features onboard the JVM210H.
Marshall JVM210H 100-watt Tube Amplifier Head at a Glance:
Channel switching and more
The JVM2 series amps don't simply give you footswitchable channels - you also get an entire palette brimming with different degrees of distortion, tonality, and effects. The included 4-way switch has five easy-to-read LEDs, making this rig ready for stage use. It's also programmable, so you can set up different combinations of channel, mode (green, orange, or red), reverb level, effects level, and master volume easily. The parallel/series effects loops are also switchable on/off. Marshall made sure you'll get the most out of this amp even when you're at the front of the stage!
Silence is golden
When on standby, the JVM2's emulated XLR output is fully operational, allowing you to record in total silence - a godsend for those late night recording sessions!
Marshall heritage
Every JVM2 is made at the Marshall factory in the tonal heart of England. Time-tested, traditional methods of craftsmanship and construction are combined with the latest advances in modern manufacturing technology, ensuring world class build quality and roadworthiness. Internally, the JVM2 circuitry and layout has been kept to a minimum, ensuring the integrity of the guitar tone and an incredibly low noise floor - this coupled with meticulous valve selection and high tolerance, quality components adds to the all-important reliability factor that is synonymous with the Marshall legend.
From glassy to a roar
Two completely independent channels sound fine, but this amp gives you so much more than that! Each channel features three footswitchable modes: green, orange, and red. These modes give you different voicings and levels of overdrive ranging from pristine clean to super-saturated, harmonic-drenched, sustain-for-days distorted. Of course, the beauty of this configuration is that you can easily dial in these tones and everything in between and access them with the touch of a footswitch.
Marshall JVM210H 100-watt Tube Amplifier Head Features:
Tech Specs:
The Marshall JVM210H gives you incredible control over its 100 watts of earthshaking Marshall tone!

Similar products to the Marshall JVM210H 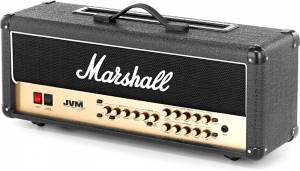